Who would have thought Contact lenses could mess up my endocrine system?
ENDOCRINE SYSTEM AND ULTRA VIOLET
The endocrine system of our body needs ultraviolet (UV) light to function, and it gets UV light from our eyes. The route that the UV light takes is not the optic nerve but a separate tract that goes directly to the pituitary gland.  The pituitary is the main endocrine gland of our body. The endocrine system controls many functions of the body such as sleep, muscle tone, digestion, elimination, a woman’s menstrual cycle, and many other functions. The endocrine system is thought to be the least known of all systems of the body. However, we do know it covers very important functions as you can see from the above list.
The solution is providing UV producing lamps in the home. All of the lighting in our office has UV producing light bulbs. That is why we are so happy all of the time!

NOW FOR CATARACTS
We have established that the endocrine system needs UV light that is received from the eyes. The next step is to link cataracts and UV light. There is a well-known study of commercial fishermen in the state of Maryland. They have a higher incidence of cataracts than the rest of the population. The study infers the UV light to which they are exposed causes the cataracts. Now, let's look closer: Studies need both reliability and validity. Reliability means that each time this study is done, the fisherman will show a higher incidence of cataracts than the rest of the population. In other words, the study is repeatable. Yes, the study has reliability, but that is not enough. The most important part of the study is validity. That means A causes B. The Maryland commercial fisherman study has reliability but lacks validity.
Almost all of them wear hats and sunglasses which give some protection against UV light. However, almost all of them are exposed to harsh chemicals. As an example, many fingernail polish removers contain acetone. In the 60's the U S Army found that skin contact of acetone causes cataracts. That study had both reliability and validity. It appears that the Maryland study may have chemicals as the cause of the cataracts and not the UV light. 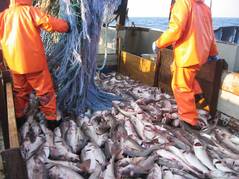 Another example is mercury poisoning in large salt water fish also causes cataracts. Sardines are exempt. Certainly the fisherman probably eat salt water fish that would be virtually free for them. You may also ask yourself a question about God who created us as well as UV light upon which we must live. Why would God make UV light cause cataracts that interfere with us seeing the world?

ANOTHER SCIENTIST’S VIEW
Further evidence comes from the company that makes photo active glasses. The research director of that company, Herbert Hoover (no relationship to the former President) in a personal call stated there are no studies that prove UV causes cataracts.

MOST DOCTORS BELIEVE THE QUESTIONABLE RESEARCH
Now the problem: Most doctors believe the Maryland study and are convinced UV light causes cataracts. The industry that provides UV blocking materials has no reason to question the study. In Lodi I may be the only one aware of or who cares about the UV problem. 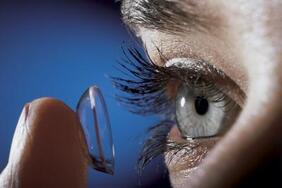 Two contact lens companies include UV blocking materials. Unfortunately, Acuvue is one of if not the most popular contact lens fit in the U S. Further, it fit by most commercial optical companies in the large box stores. Acuvue contacts are successfully worn by many and are good contact lenses. UV blocking eyeglasses are not a problem as the light gets around the edges of the glasses. Yet, Acuvue lenses totally cover the pupil and UV light can’t get around  the lenses. Thus, UV is blocked.

OUR SOLUTION
Thus, we recommend never using a UV blocking contact lens. Basically, these lenses are harmful to your health. The only problem is we do not know the degree. I can’t imagine women in childbearing ages wearing UV blocking contact lenses. A 14-year-old girl with an endocrine problem came to the office from another doctor wearing Acuvue contacts. We replaced her Acuvue lenses with well fit comfortable non-UV blocking contacts. Two weeks later she no longer had an endocrine problem! Imagine what it means to women in menopause. We provide contacts that don’t block  UV that are equal to or better than Acuvue’s. You may even be eligible for contacts that cost even less than Acuvue’s. *

DON’T FRET IF YOU LOVE YOUR ACUVUE’S
Obviously our office cares about your eyes and your vision. However, we also care for you as a total person. Thus, those of you interested in health, exercise, and nutrition, we advise avoiding UV blocking contacts or even glasses. It is your body and your eyes. You are responsible for both. We assist you with your vision care, but would not in any way prevent you from wearing any contact lenses of your choice as long as they are properly fit. Yes, we do have patients wearing Acuvue lenses. Is there an alternative for Acuvue lovers? Yes, we advise walks in the noon sun with the UV lenses out and glasses on.

* Our alternate wear contacts cost less because they hold up longer than the normal two week or one month wearing period and don't need to be replaced as often. They then safely can be worn for longer periods.
The danger of Acuvue ultraviolet blocking contact lenses. No, I really am not napping and snoring, The camera just caught me at an awkward  moment.