Extra Tests You Had 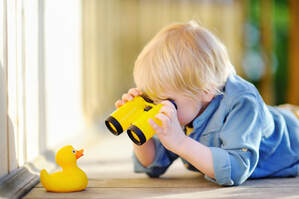 We looked a little closer: 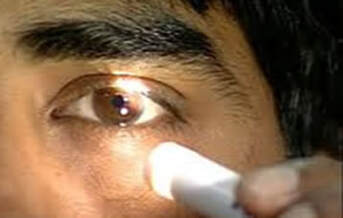 The science of light therapy (syntonics) has brought a simpler tool to indicate when a comprehensive rather than visual field screening  is necessary, and it saves time.

The alpha omega pupil response is the new tool. Normally when light is shined at the eye the pupil constricts (gets smaller) and holds that smaller diameter for a period of time. However, whenever you are hit in the head it opens sooner than normal. Our scale goes from zero to 4. A 4 would be an immediate opening while zero would be normal. Thus we only do the screening when a normal alpha/omega reaction is present. We take pupil reactions anyhow so the alpha/omega pupil test doesn’t add a lot of time to the exam. If present, we then schedule a comprehensive vision field.
Once we see the results, we can determine treatment with light therapy and then retest the field to see the change. On occasions, thankfully rare, we could detect glaucoma or a pituitary tumor.

You will be comfortably seated (some smaller kids stand) and look into the campimeter with one eye blocked. You constantly look directly at a target in the center of the screen while an assistant moves a small target at the end of a wand from the side until you see it. Once the sides are checked, we do the same for your blind spot in that eye. We then do the same for the other eye. We have been able to measure children as young as five.
The tests are:
1. Speed of processing
2. Selective Attention
3. Reversal Frequency
4. Visual Memory
5. Visualization
6. Logic and Reasoning
7. Visual Motor
8. Visual Closure
9. Visual Discrimination
10. Visual Matching Possessing speed
In addition we conduct a Toni-2 Test of Non-Verbal Intelligence and a Ken Gibson Auditory Analysis 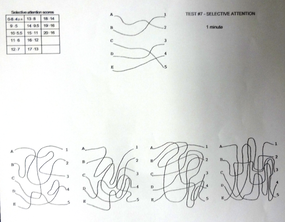 2. Selective Attention is the ability to pay attention to a task in any environment. Certainly our classrooms and many businesses have much going on at the same time. It is basically concentration. In the test without the guidance of a finger your child connects Letters to numbers while following scribbled lines while timed. 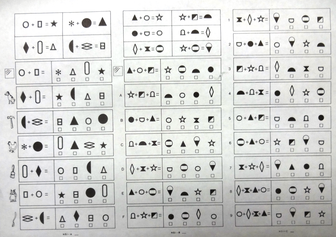 5.Visualization is the ability to picture and describe a familiar object when the object is not present. Describing your house or car may be an example. This skill is the most essential in learning. It is virtually comprehension in reading. It is also the basis of creativity. Obviously visualization is essential in school and business as well as the arts and entertainment. In this test your child is presented with anywhere from two to four sets of symbols. One set could show a circle equals a ball(❍= ball) and a Square equals a box ( ❒ = Box), Then your child reads a sentence that says A Box beside a ball. Your child would then select the picture of a box beside a ball (❒ ❍), not under or, over or inside. As the test progresses the symbols and questions increase in difficulty. 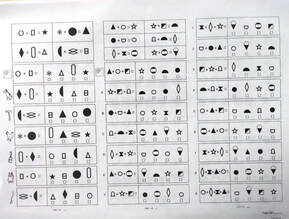 6. Logic and Reasoning basically is how the world goes around. Can your child understand mathematical concepts like geometry and word math problems?
In this test, similar to the Visualization test, your child is presented with anywhere from four to six sets of symbols.  One presentation in a set would say a circle plus a square equals a star (❍ + ❏ = ★). The other three would have varying symbols. Your child then looks at a set below the four that shows a circle plus a box equals(❍ + ❏ = ). To the right are four choices (❋  ♢ ★ ▲). Your child would then select the star (★). The test then increases in complexity

7. Visual-Motor is basically eye-hand coordination and is reflected in hand writing. Yet it is so much more since many don’t think hand writing is important in our digital age. Obviously it is important in sports and art, but does it have further implication. Do you or your child have fluidity in thought and speech? Your hand writing reflects. Are you readily understood, or do people walk away with a question mark? The test consists of a series of 33 symbols of which your child must copy in order within a confined space in a limited time. 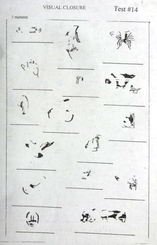 8. Visual Closure is the ability to determine an outcome with the presentation of minimal clues. This is essential in reading speed. You will read faster if you can anticipate from the phrase you have read what logically will follow. Obviously this makes good detectives and business people who must predict business trends. Maybe this is one reason your child reads slowly. Your child is presented with unfinished pictures and your child must determine what they are.

9. Visual Discrimination is the ability to determine differences between similar objects. It is important in your child realizing that reading is related to history and even math. Imagine what it means to businesses in predicting trends. If we all had this, we would probably elect better politicians! Athletes will be better able to note the finger grip of a pitcher to determine the oncoming pitch. The test presents an example of a shape on the left and then selects from five similar shapes on the right which is exactly the same as the one on the left. 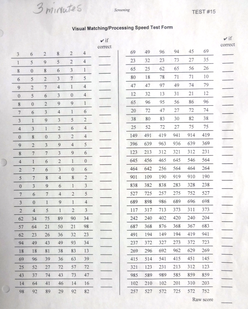 10. Visual Matching Processing Speed is the ability to recognize similarities in numbers shapes and concepts. It is essential in reading as well as math. Imagine struggling through balancing a check book. Athletes need this for quick reactions.
In the test your child is presented with a number in the left-hand column and a series of three numbers in the right-hand column, but only one is the same. Your child’s task is to circle the same number. The numbers increase in length and the test is timed.