Nearsightedness? .
What’s that? Does it say I can see near but not far away or vice versa?

Then they have this other name, myopia....
Nearsightedness definition
The American Optometric Association says nearsightedness means you can see near objects  clearly, but far objects blurry. It emphasizes, what the eye can do rather than what it cannot do.  For more than 90% of nearsighted people this is correct.  Yet, some can be so nearsighted that they can’t see at near vision either!

Another term for nearsightedness is myopia, which means small or a short  eye. It derived from nearsighted people squinting to see distant objects, giving the appearance of a small eye. 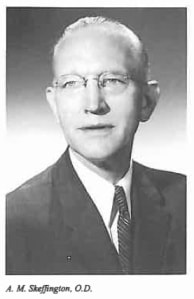 A.M.Skeffington, the father of Developmental Optometry, stated nearsightedness is the response of the organism to the socially compulsive near centered task. At the time he meant reading under stress causes nearsightedness. Today he would have included digital.

The inheritance hallmark falls apart.
More modern measurements bring earlier assumptions to be just that, assumptions. At birth the eye is 95% fully grown. That is not much room for growth of any baby’s eyes, The genetic theory to be true, would have to find many myopic babies. There aren’t today and never have been. It escapes me how that was overlooked in their theory.
Photo: PD 1923 Whipikedia

The West Point study proved fully grown adults become nearsighted from their book studies. Francis Young at Washington University made apes nearsighted by exposing them to near point puzzles. The twin separation studies were dishonored realizing the environment in all US cities are virtually identical.

We do know children became nearsighted in the fourth grade as their reading volume went way up when they switched from learning to read to reading to learn. The volume of books read increased dramatically. Unfortunately, today kindergartners become myopic as we force high level stressful learning at earlier ages.
Anti-reflection coating and a light blue tint boosts lens therapy. The blue-light blocking lenses have not yet been fully investigated but show promise. As an example, we rely on blue light to awaken in the morning. Prescribing blue blockers in glasses worn full time is not a good idea. However, for those desiring blue-blocker’s, they’re available..

Visual hygiene
There are many guidelines to reduce eyestrain too numerous to list here. Advice such as correct computer screen placement and frequent breaks from close work can be found at 7 steps to protect your children's vision from the rigors of the classroom in our Teacher Parent  section..

What about LASIK?
LASIK is not a cure but a compensation. It is no different from prescribing stronger and stronger glasses. You are simply carving your prescription in your eye rather than a piece of plastic. Yes, it is common for the eyes to become more nearsighted requiring surgery again. For the right person it has value. Our LASIK patients are closely followed and receive lens therapy to keep them from the knife again. Look to studies and articles under: LASIK to get the whole story of this valuable procedure for the right person.

Orthokeratology is an answer.
This is fitting a rigid contact lens to mold the shape of your eye like LASIK does but without surgery. It is similar to orthodontics and requires a retainer.

Long term Atropine drops
This questionable  drug use may bring on problems worse than nearsightedness. Its long term damage to the rest of the body is not adequately researched. I was surprised to note  colleagues who had to study anatomy, physiology, pharmacology, physics, and vision theory (we all had to do that) would have proposed this invasive practice.