Why are we making kids pirates?

Amblyopia is steeped both in controversy and confusion.
It has an unfortunate  nickname of "Lazy Eye." The name gives miss impressions on when and how to treat amblyopia. It was based on time worn and questionable theory. Through science optometry's more effective treatment was validated. There is relief that treatment past age 7 is effective..

First, what is amblyopia?
By definition amblyopia is reduced visual acuity not correctable by refractive means and not attributable to obvious structural or pathological ocular anomalies. Yes, that is confusing unless you are an eye doctor. In lay terms it means that despite a good vision examination the doctor cannot get one of your eyes to see 20/20.

Amblyopia is really a dim headlamp!
Hopefully this comparison will bring understanding.

Let’s polish both headlamps of our car. That is like Dr.Henshaw examining each eye for glasses.

Then you push the headlamps into their sockets. Yet, one headlamp is not pushed all the way into the socket.Thus, all wires aren’t firing resulting  in a dim headlight, just like an eye with amblyopia.

Why is amblyopia called a lazy eye?
Shelly and are are obviously lazy here, but we don't have amblyopia. So, from where did the Lazy Eye" term come?

More than 200 years ago leading eye doctors got together and declared with no studies as back-up that amblyopia is an eye that has not developed correctly.Thereby, the other eye does all the work making the amblyopic eye only coming along for the ride. Thus, it becomes lazy.

Check this out your self. Simply close one eye. That takes effort.It most definitely is not lazy.  Imagine walking around all day that way. By understanding this, a different more successful treatment is applied rather than the time worn  approach. By closing the eye over time the eye isn’t used as much as the other. This disuse makes the image dimmer. Then there is less confusion of which is the real image as the eye with amblyopia is dimmer. Then over time the amblyope doesn’t have to close the eye. Yes, the process is more complicated, but that is the basic idea.

The lazy eye name often is confused with an outward turned eye.
Although amblyopia is often found with strabismus (an eye that turns either inward or outward), it is not strabismus. Amblyopia diagnosis and treatment is complicated enough, and this added confusion is not needed.

Why do doctors say that amblyopia can’t be treated after age seven?
The same doctors sitting in arm chairs with no study to back their old fashioned untested theories were at it again! They surmised amblyopia was developmental with a critical period (the eye must go through sequenced progressive change within given time periods). After that critical period they thought  the nerves are incapable of improving. They attributively  set the critical age at seven.

Hubel and Wiesel won The Nobel Prize in Physiology or Medicine 1981 for research in the critical period for chicken’s eyes. Many people felt that supported the old-fashioned time worn view that amblyopia could not be treated past the critical period of age seven. Yet, Hubel stated that was not true and changes could be made. 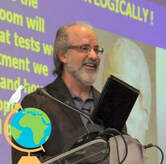 Fortunately some doctors did not buy the time worn theory and treated their patient anyhow.

How is amblyopia treated?
First,  how was it treated in the past? Doctors started making patients pirates. Since most doctors thought the eye was lazy and still do to this day, they would patch the eye without amblyopia to make the supposed lazy eye work. Occasionally a little progress would take place perpetuating the approach.
Rarely was 20/20 achieved by patching.

But what is happening? First, their eye turn gets worse. After all they are blocking one eye making team work impossible. If the patch is not the treatment when both eyes are used the peripheral vision of each eye matches even though the central vision clarity does not match.  That helps keep the eyes reasonably aligned. As mentioned, with the patch alignment is impossible

Fourth, it is flat out cruelty as well as dangerous. Almost all kids patched wisely remove the patch or refuse to use the patch. One die hard patching ophthalmologist literally sutured a patch on one child! 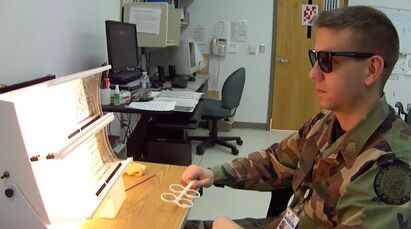 What is the better treatment?
Treating the cause, the binocular vision condition, with vision therapy appears to be a better method. Once the eyes are aligned, there is no reason to keep the reduced vision, and natural clear vision emerges.

Yes, it is a process and I don’t mean to make it sound easy. Although both non-invasive and fun It could take 36 sessions.

What is the next step?
1. Your glasses are carefully customized to avoid the usually thick heavy full prescription of the amblyopic eye. This is the opposite of time worn traditional care

2. Next diagnostic testing is done to evaluate your binocular vision and determine the type and length of treatment necessary.
3. Then vision therapy is prescribed to get to the cause of the problem. That cause is faulty binocular vision.

For those who are not ready to treat yet:
Until you are ready, we provide lens therapy to protect the eye that does not have amblyopia because it also is over working. Go to  Lens Therapy Explained to learn more about this valuable treatment. Some times that large prescription that the amblyopic eye shows isn’t prescribed to avoid addiction to the lens that does not give 20/20 visual acuity.
You are welcome to view the video below, Amblyopia is NOT really a "lazy Eye."